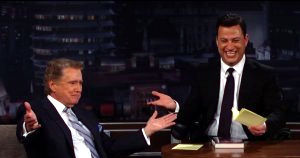 Talk show host Jimmy Kimmel set a Guinness World Record in 2007 for the most miles commuted in a work week.

Kimmel appeared as a guest host of Live with Regis and Kelly from October 22 through October 26, and commuted every day between New York and Los Angeles. In the end, Kimmel traveled a total of 22,406 miles in a single work week.

"I am a little bit insane," Kimmel told The Associated Press. "It will be difficult, but that's how committed I am to entertaining America. And parts of Canada."

Kimmel prepared for his nightly show while flying west and slept during his overnight flights east.

"For whatever we lose from not being able to prepare for a long time, I think we'll gain in stories and stunts as it happens. People can tune in and watch me collapse on air."