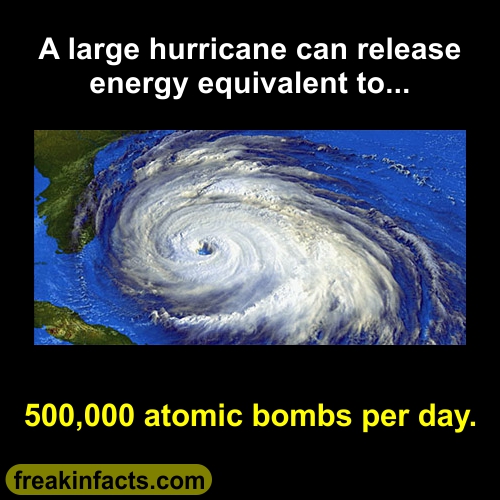 The energy of a severe hurricane can equal that of 500,000 atomic bombs per day.

The staggering amount of energy in a severe hurricane has been described as 1015 Watts, or about 3,000 times the total electricity generated in the world.

According to the WebPhysics page at IUPUI,

Where does this staggering quantity of power come from? Primarily, it comes the the condensation of water. You may recall that the latent heat of vaporization of water is 2.256 MJ/kg. That is, it takes 2.256 million Joules of energy to boil one kilogram of water. Of course, the reverse is also true. When one kilogram of water condenses, 2.256 million joules of energy become available.

Scientsts have not yet figured out a way to harness the energy of hurricanes or tornadoes. The suggestion to place wind turbines along a hurricane's path presents two problems: Placing it in the middle of the ocean, and creating them strong enough to withstand the storm itself.