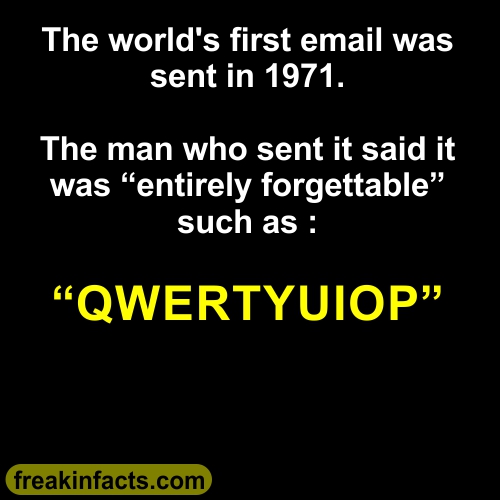 The world's first email was sent in 1971 by Ray Tomlinson between two side-by-side computers. The first message was "forgettable."

Although often cited as being "QWERTYUIOP" Tomlinson has used that as an example of gibberish that he used to communicate during those first emails. He writes:

The first message was sent between two machines that were literally side by side. The only physical connection they had (aside from the floor they sat on) was through the ARPANET. I sent a number of test messages to myself from one machine to the other. The test messages were entirely forgettable and I have, therefore, forgotten them. Most likely the first message was QWERTYUIOP or something similar. When I was satisfied that the program seemed to work, I sent a message to the rest of my group explaining how to send messages over the network. The first use of network email announced its own existence.