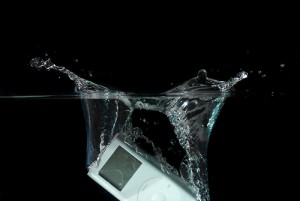 Steve Jobs dropped the first iPod prototype into a fish tank to show engineers that it was too large.

Apparently Jobs was unhappy with the size and weight of the prototype, and used this impromptu demonstration to to prove his point to engineers. Why would he drop it into a fish tank? Jobs claimed the amount of air which bubbled out of the device was a sign that there was still “some space” in it.

Here is the full account as told by by John Naughton of the Guardian:

Jobs never allowed the opinions of others to drown out his own “inner voice”. One of my favourite stories about him is about the moment when the Apple design team presented him with the first version of the iPod. He looked at it for a while, turned it over and over, weighed it in his hand and then said: “It’s too big.” The engineers protested that it was a miracle of state-of-the-art miniaturisation – 1,000 songs packed into that tiny space. Jobs walked over to the fish tank in the corner of his office and dropped the prototype into the water. He then pointed to the bubbles that floated from it to the surface and said: “That means there’s still some space in it. It’s too big.” End of conversation.